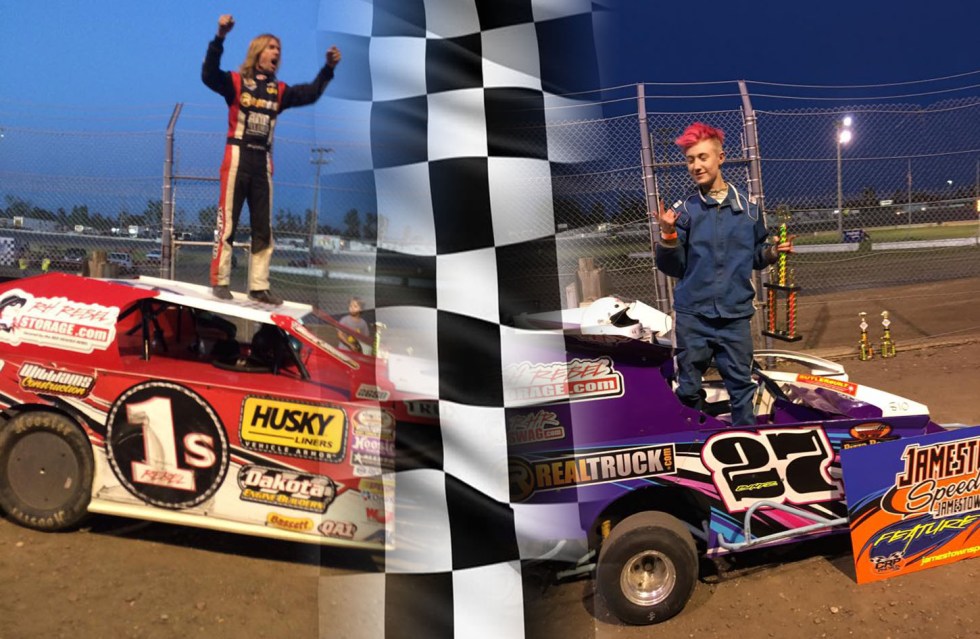 The RHRSwag.com sponsored #27 Slingshot and #1s Midwest Mod both brought home hardware for the Scott Bintz Racing team last Sunday. The night began with an unsettling event in the IMCA Modified heat race when the Concrete Cowboys sponsored #4* driven by Cam Bintz made contact with a few other cars on the third lap rendering his steering ability less than optimal. By the fifth lap, Cam Bintz was unable to get the proper dig and cornering ability out of the car and rolled the #4* over the bank of the track. Safety crews were on the scene immediately and to his family’s relief he was able to walk away with only a few bruises.

As the night went on, Scott was able to obtain the outside pole in his Truck Hero sponsored car of the Wissota Midwest Mod feature event. He led the entire pack for every lap of the 20-lap race. On the last lap the cars ended up three wide around corner four, but the #1s was able to pull out the victory by just .019 seconds. It was too close to call until the announcer made the call and Scott took home his first Jamestown Speedway trophy in close to two years.

The night finished out in good spirits as Ray Bintz was able to win in #27 RealTruck.com sponsored Sr. Slingshot, beating out the other two competitors.

It may not have been a smooth night for the Bintz trio, but it is early in the season and they look forward to bringing home more hardware from their home track in Jamestown, North Dakota.