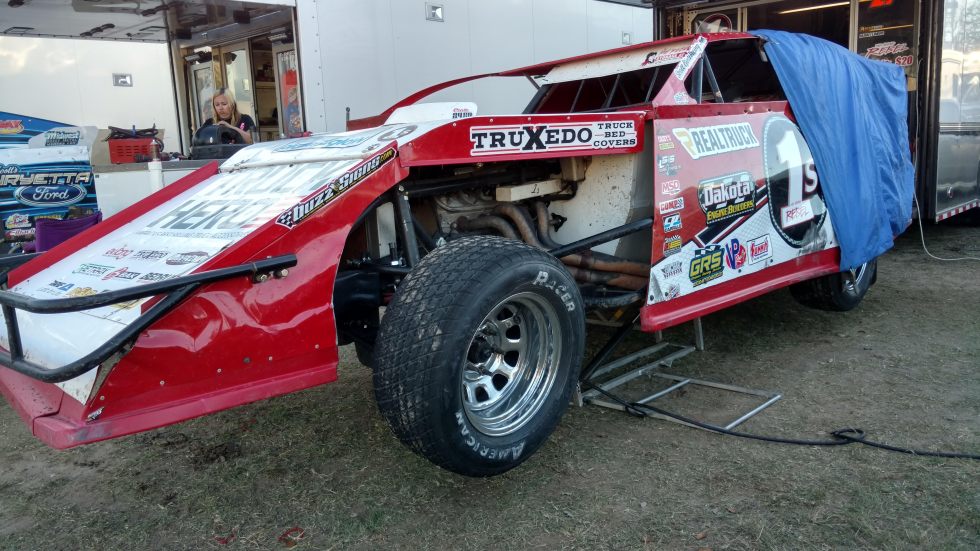 Travis Saurer pulled in a solid weekend in Golaid, Texas at the Shady Oaks Speedway and leaves the area leading in rookie points.

Saurer started the weekend with with his first Bmain performance of the Southern Region USMTS Tour. After moving from 5th to 3rd in his heat race, he then moved from 4th to 3rd in the Bmain event. In the feature race that same night, he received the the Hard Charger award as he moved from the 18th position to finishing 6th in the MB Customs/GMPP #1s car. Although the heat race and Bmain event did not help his starting position in the feature event, Saurer continues to show his improvement and the capability of the #1s car while he is behind the wheel. Ricky Thorton Jr. ended up clenching the winning spot to earn his first win of 2017 after leading the entire 30 lap race.

On Friday, Saurer decided to race the #1s Dakota Engine Builders car which proved to be a wise decision. In his heat race he moved from 5th to finish 2nd and put himself straight through to the feature event where he started in the 3rd position behind Chris Brown of Spring, Texas and Ricky Thorton Jr. By the 12th lap as Thorton and Brown were fighting for the same real estate they made contact in the fourth corner which drew the second yellow flag of the race. Officials conferred and sent both leaders to the back of pack for the restart. During the same lap Hughes was able to pass Saurer for 3rd place, putting himself in 1st after the restart. Hughes was able to hold onto the lead for the remainder of the race and Saurer finished in 3rd place which would be his best finish of the weekend. Ryan Gustin finished 2nd while the original leaders, Thorton and Brown finished 13th and 15th respectfully.

The last night of racing was Saurer’s best night as he switched back to the #1s GMPP Crate car and led a total of 20 laps during the 40 lap event. After finishing 2nd in his heat race, Saurer received the 2nd position to start the feature event. Saurer was quick to move as he passed Johnny Scott on the second lap and they traded positions for the next few laps. Saurer ended up leading laps 2-3 and 5-22, but gave up the lead to Cade Dillard of Robeline, Louisiana on lap 23. Dillard went on to win the event while Saurer finished 8th.

As the weekend wrapped up Saurer can walk away content with his performances. He only had to compete in one Bmain event of the tour thus far and had solid races in two different RHRSwag sponsored cars. Saurer has only one finish below the top ten in his past six feature events showing that he can compete with the best drivers of the USMTS. Saurer also leaves Texas with five Contingency Awards from the weekend including Allstar Performance from Saturdays race and continues into this coming weekend leading in rookie points with a total of 460. As the Summit Racing USMTS Southern Tour moves to Mississippi we’ll keep you posted on Travis’s success as he pursues his first win of 2017. Check out Saurer’s interview at the Shady Oaks Speedway below.

In the meantime, stay up to date on the USMTS schedule,  Travis Saurer Racing, and ScottBintzRacing.com