After several weekends of rain outs, the SBR team was able to get in the first fun filled, full weekend of Wissota racing action.

The down and dirty: Buried the hauler 2 feet deep but still made it to 3 tracks, two 2nd place finishes and a 5th place finish.

The long version: On Friday, May 6th, after extra help from Correl Farms, Randy’s Auto Xpress, K&D towing and Dakota Engine Builders in getting the hauler pulled from the mud, we headed for the I-94 Speedway in Fergus Falls, MN for their season opener.

The temperature was in the 60’s and there was a full turn out of race cars and fans. Scott drew the 8th starting spot in the 2nd of 4 midwest modified heats. The tacky track was fast and Scott was able to move up to 3rd at the checker putting him in the 10th starting position for the feature. With a full field of race cars the feature was smooth and fast going from green to checker with no cautions. Scott moved up a car or so ever few laps for a 5th place finish at the end. #21x Travis Saurer won followed by #22 Levi Arneson and #6 Brian Haben. 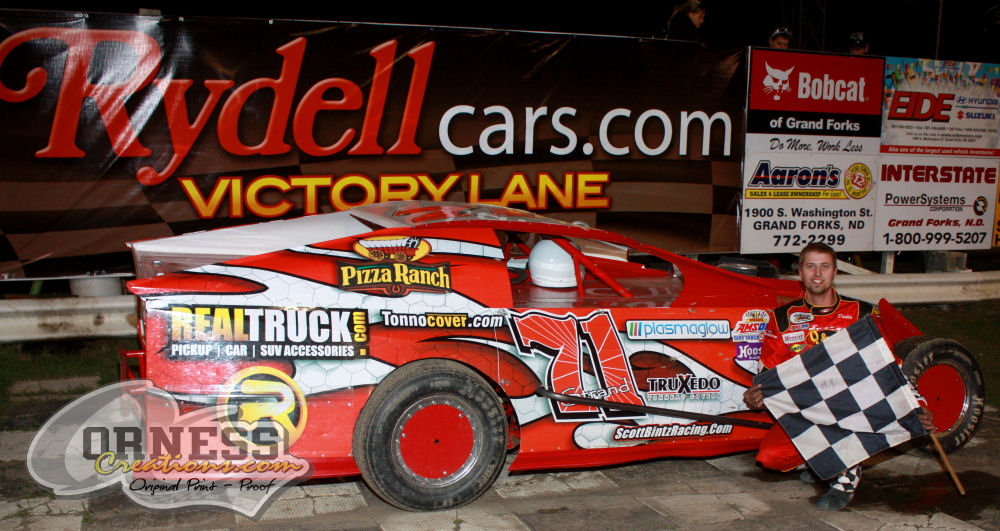 On a side note, test pilot and past national champion, Dustin Strand drove the back up Dakota Engine powered Millenium chassis into victory lane at the River Cities speedway in Grand Forks, ND on Friday night.

On Saturday, we headed about 40 miles further east to hit up the Viking Speedway opener in Alexandria, MN. The fast 1/2 mile track is known for tough competition and fast racing with the long straight aways and sweeping corners. Scott’s drawing skills haven’t improved much, so we started 6th in the 2nd of 4 heats of the night. Not being overly familiar with the track, the car was set up way to tight for the track, but amazingly we moved up a couple of spots to finish 4th in the heat putting us in the 14th position for the feature.

After some fine tuning on the suspension, we were ready for the feature but not really knowing what to expect for the track conditions. The track was fast with lots of passing and a few cautions along the way. With about 4 laps to go, Scott had made it up to 2nd and was challenging the leader, #21x Travis Saurer for the lead running almost even up at one point across the line giving the fans some last minute excitement. However, Saurer hasn’t won over 200 features because he is easy to pass. Saurer adjusted his line and was able to hold Scott to a 2nd place finish with #6 Brian Haben in 3rd.

Feeling good about the car, we headed back to Jamestown for Mother’s Day fun and then back to the race track for the season opener at the Buffalo River Race Park in Glyndon, MN. BRRP is a small 1/4 mile track known for tight racing and crazy fans. The weather was fairly questionable, but Mother Nature kept the rain away for the races. Scott drew pole of the 1st heat. Losing the lead on about the 2nd lap, Scott was able to reel back in the leader and take the lead with about 3 laps to go, picking up the first heat win of the season. Starting 3rd in the feature, there was a first lap caution and then the race got under way.  Scott got the earlier lead and was several cars deep into lap traffic with 3/4’s of the race complete. With the car being a little pushy and then getting jammed up behind two lap traffic cars, Saurer took the lead. This time it was #42 Ron Saurer. There was a caution with 3 laps to go. On the restart, Scott put every he and the Millenium chassis had into passing for the lead, but good ole Ron Saurer had his car and driving dialed in and there was no catching him. Scott finished 2nd with #2K Rusty Kollman in 3rd.

Ultimately fun was had, the Dakota Engine Builders powered, Milleninum Chassis 1s machine is getting fine tuned and the racing season is in full swing. See you at the Track!!  For at the track nightly updates, join the Scott Bintz Racing Fan club on facebook.

Special props to all our sponsors, including TruXedo Tonneau Covers for making the best tonneau covers and great race fans.